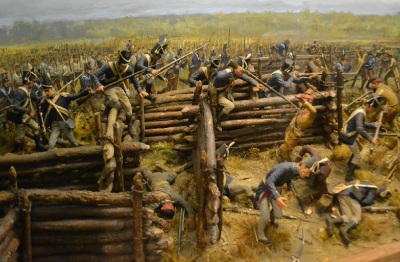 General Andrew Jackson  with a force of 2000 U.S. regulars, militia, Cherokee, Choctaw, and White-Stick Creek defeated the Red Stick Creeks near Dadeville, Alabama at Horseshoe Bend. Only about 50 Red Stick warriors survived. The Red Stick leader William Weatherford was not at the battle, but would turn himself in later. The defeat led to the Treaty of Fort Jackson in August, where the Creek gave up 23 million acres of land to the United States.