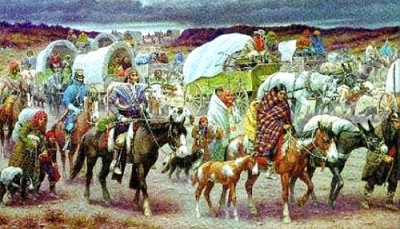 President Andrew Jackson signed the Indian Removal Act into law seizing the lands of the “Five Civilized Tribes.” Congress codified Jackson’s suggestion that the U.S. government renege on all of the previous peace treaties, which granted Indians their lands forever, and remove all Indians west of the Mississippi River.