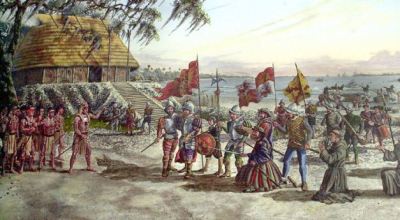 Spanish Adventurer Pánfilo de Narváez’s expedition, accompanied by Aztec Prince Tetlahuehuetzquititzin left the Apalachee village of Ivitachuco in Florida to begin their quest for gold. The expedition planned to reach the village of Aute, near present-day St. Marks, Florida. Tetlahuehuetzquititzin, who fought with the Spanish against Montezuma, was later killed in a fight with Apalachee warriors.